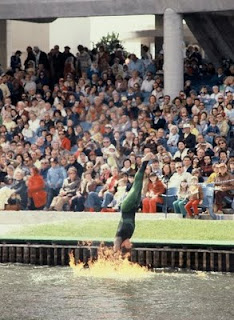 As part of his ongoing series of interviews with the performers of the 1976-79 SeaWorld SuperHeroes stunt show, Marc Tyler Nobleman has posted his interview with Dan Poor , the high diver who portrayed Green Arrow in 1979. Be sure to stop by and read his article here.

Thanks for the heads up, Marc!

Green Arrow is the MAC ! 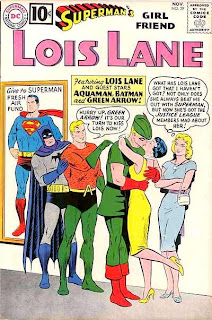 The cover of Superman's Girlfriend Lois Lane #29 sort of says it all. Green Arrow has, over the years developed sort of a reputation as-shall we say- a ladies' man. I mean, Black Canary left her parallel Earth to come get with that! Add to that the fact that G.A. could form an entire super team made up of his illegitimate offspring and well, let's just say that rep isn't entirely undeserved.

As a regular feature, I will occasionally post random panels that highlight the romantic side of our hero's nature. Here's the first: 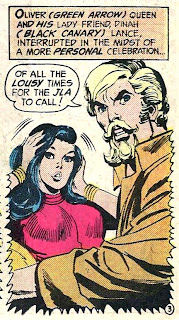 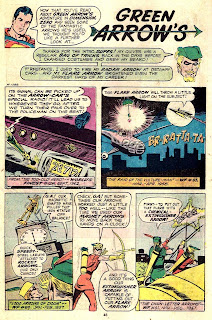 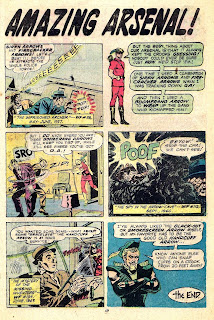 From Action Comics #449 (July, 1975) comes this wonderful, two-page spread highlighting some of Green Arrow's more entertaining trick arrows. It also features some narration by one of my favorite spokesmen: the disembodied, stock-art head of Green Arrow. 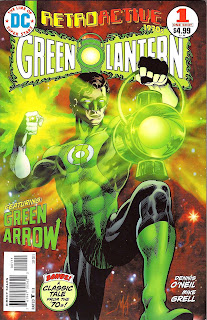 As DC Prepares to roll out their "New 52", they've decided to promote the sweeping changes to their line up with a nostalgic look back at the DCU as it was. This being a blog about Green Arrow, and DC not releasing a Retro-Active Green Arrow comic, you may wonder why I mention this. You may even be wondering why I'm starting off my Green Arrow Blog with a Green Lantern comic. No, I'm not suffering from "green hero confusion". This one-shot by Veterans Denny O'Neil and Mike Grell captures the Green Lantern of the 1970's right down to one of the best things about the whole series: 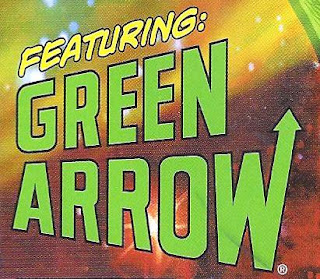 From his debut in 1941 (in More Fun Comics #73- the same issue that featured the debut of Aquaman) Green Arrow was strictly a back-up feature. He was featured in the team book Seven Soldiers of Victory and was the first "new" member nominated to the JLA (not counting Snapper Carr). He was featured quite a bit in The Brave and the Bold. Green Arrow did not rate his own title. Until the 1980's, the closest GA ever came was sharing a title with Green Lantern. Thus, this 70's throwback written by 70's GL/GA scribe Denny O'Neill and drawn by the second GL/GA artist Mike Grell features Green Arrow as more of a co-star than a guest star.

The story in the first feature of this nifty one-shot features parallel story lines for our green goodguys. While Green Lantern tries to rescue a crash-landed alien who seems hauntingly familiar (he's the brother of Abin Sur) Green Arrow has to figure out who keeps shooting people he knows full of arrows. 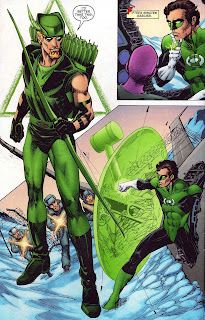 I'm not entirely sure how 1970's this all feels. Although it has some of the anti-establishment feel of the 1970's Green Lantern/Green Arrow comics, both the government paranoia of the Green Lantern story and the serial killer plot of the Green Arrow story seem more reminiscent to me of Mike Grell's tenure as writer/artist on Green Arrow in the late 1980's. Still, it was fun to see O'Neill and Grell do a GL/GA yarn.

The second feature in the comic is a reprint of Green Lantern #76 (April, 1970) by Denny O'Neill and Neal Adams. 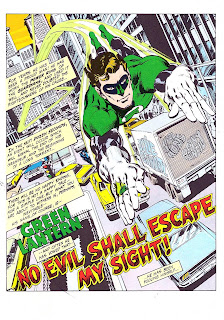 Green Lantern attempts to stop a fight and ends up picking the wrong side. Not legally, but morally. Green Arrow shows up and reads his pal the riot act: 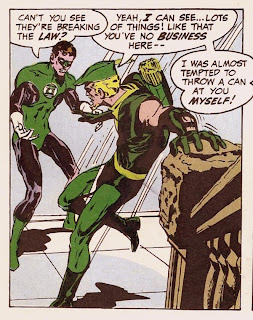 After a few arguments (in which-I have to say- Green Lantern is kind of a straw man to Green Arrow's moral outrage) and an adventure where Green Lantern learns that businessmen are inherently evil, Green Arrow, Green Lantern and one of the Guardians of the Universe decide the best way to understand right and wrong is to get in a pick-up truck and go on a road trip to find America or something. 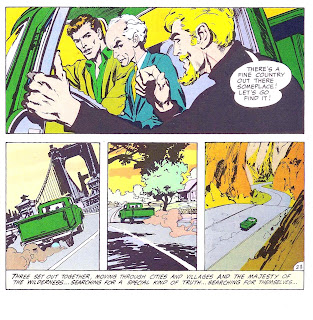 Thereby kicking off a landmark series in the history of comics and giving Green Arrow some much-needed face time.

Tomorrow: Trick Arrow Tuesday!
Posted by Aaron at 11:38 AM 3 comments:

The Arrow Cave Needs YOU! 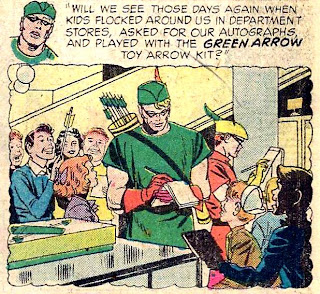 Hi. I'm Aaron. This is my blog devoted entirely to The Green Arrow. Welcome.

I'm currently working on getting a few weeks' worth of material put together to make this a blog worth reading. I hope to have it up and running before the September 7 launch of the new Green Arrow #1

I plan to make this a fun place. I want to post synopses (with commentary) of various stories starring the Emerald Archer pulled from the nearly 70 years he's been in print. I will also be featuring things related to G.A.'s extended family- Black Canary, Speedy, Miss Arrowette, the JLA, etc.

So, what do I need from you, the reader? Well, apart from you stopping by occasionally to read the stuff I write about Green Arrow, I need some additional material and input. See, I have LOADS of Green Arrow comics from the 70's to the present. And I have quite a few Green Arrow toys in my collection I can feature as well as a few bits of Green Arrow merchandise. However, I would love for you, the reader, to e-mail me with photos of your personal Green Arrow collections. Send me a scan of that Green Arrow sketch you got at that comic con, a photo of some dude you saw walking around at San Diego or NY or Chicago dressed like Green Arrow. Heck, I'd even be interested in your stories about how you became a Green Arrow fan.

If I use your stuff, I'll give you credit on my blog and send you some sort of honorable mention certificate or a no-prize or something to be determined later.