The Arrow Car: Gone But Not Forgotten

I want to set the record straight, here, folks. Despite conventional wisdom and (admittedly entertaining) smart-ass jokes by Kevin Smith and Scott Beatty, Green Arrow probably did not rip off Batman's Batmobile by having an Arrow-car.

In it's original incarnation, the Arrow-car was dubbed the Arrowplane (not to be confused with Green Arrow's later airplane of the same name)- a pun on the British spelling/pronunciation of airplane- "aeroplane". Presumably, its aerodynamic, streamlined shape allowed it to "plane" the air, making it fast. 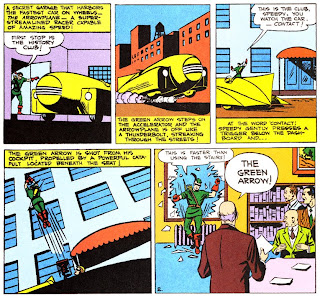 As seen, the Arrowplane was equipped with a catapult which could launch the battling bowmen into action, a feature which was retained in all subsequent designs.

I can't find any solid evidence, but I suspect the Arrowplane's original design (and yellow color) owes something to the 1929 Land Speed Record-breaking car the Golden Arrow. 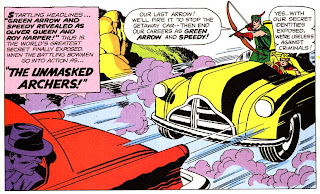 In a 1958 Green Arrow story "The Green Arrows of the World", the Arrow-car was a significant enough piece of G.A.'s arsenal, that his British counterpart had his own (stereotypical) version: 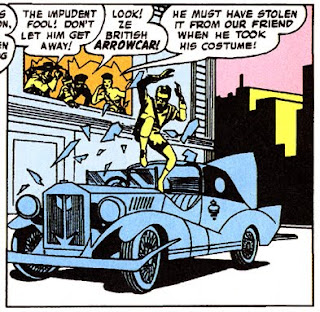 By 1963, the Arrow-car had had another makeover and a more modern version sporting contemporary tail fins appears in The Brave and the Bold #50: 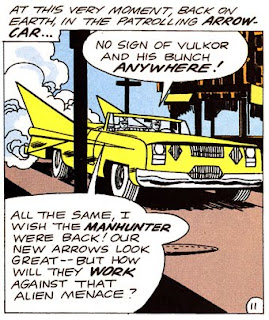 Note that this was three years before George Barris' iconic television version of the Batmobile.

By 1978, that version of the Arrow-car had been shelved (apparently) as evidenced by the re-appearance of the earlier version in World's Finest #254: 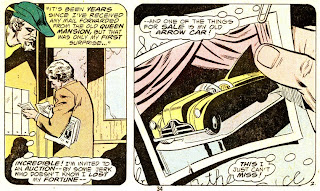 After Green Arrow's 1969 make-over, Oliver Queen has lost his fortune, his cave, his plane and his beloved car: 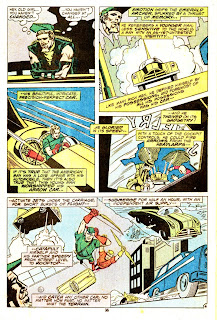 In this story, the Arrow-car resurfaces (now spelled Arrow Car), is purchased at auction by gangsters and is finally blown up by Green Arrow himself who destroys it with a hand grenade arrow rather than let it be used for evil.

Also in the 1970's, the good folks at Mego toys felt G.A. really could use his own ride, so they put together this sporty little number: 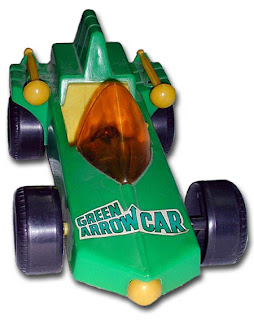 It looks awesome, it shoots darts, the only real drawback is that you can't actually put your Green Arrow behind the wheel unless you take off his oh-so-fragile quiver. Still, A+ for effort!

You might think the unfortunate demise of the Arrow Car in World's Finest#254 would settle once and for all the issue of whether the Emerald Archer was going to get his sweet, custom ride back. And you would be dead wrong.

Speaking of Dead- not long after Green Arrow returned from the dead in 2001, Brad Meltzer sent him on a quest to get his house in order. In the Dec, 2002 issue, Ollie and Roy literally go to get their old house in order. While revisiting the remains of the original Arrowcave under the ruins of Queen Manor, the battling bowmen discover that if you don't stop by once every decade or so, you run the risk of an evil zombie problem.

Sleeping (or whatever he does) in a forgotten corner of the Arrowcave, Solomon Grundy wakes up and starts some trouble, including throwing the Arrow Car at G.A. 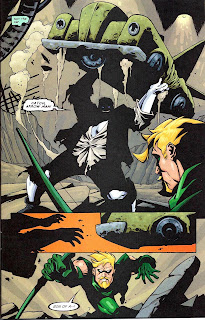 Seems like Author Brad Meltzer sees conspiracies everywhere, but he didn't see World's Finest#254 where that self-same car was already blown up. 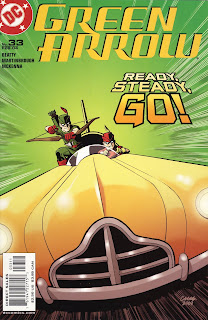 This time, the car is for sale on "dcBay": 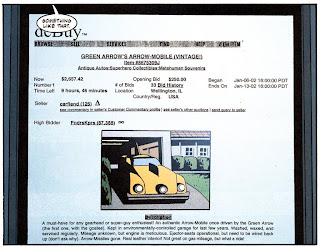 Although the cover art shows what is clearly the "second" Arrow-car from the 1940's and 1950's (which was blown up in the 70's and then smashed by an angry zombie two years prior to this issue), the interior art depicts a coupe with three headlights and a weird little fin on the hood.

While Ollie reminisces about how much he loved his car and how he blew it up (this time in a weird, spiteful moment after he falls out with Speedy), Batman buys the car for him.

Turns out the Arrow Car's self-destruct switch was faulty. The explosion Green Arrow witnessed was from the burning building he and Speedy had just crashed the Arrow Car into. The car was recovered by a fireman who restored it and drove it in local parades for several years before putting it up for sale.

When Ollie and Mia go to pick up the car, they get into a scuffle with the Scavenger who wants to add the car to his weapons collection.

After defeating the Scavenger, the car breaks down on the way home and Green Arrow blows it up once and for all with the newly-repaired self-destruct.

Will there be another Arrow Car? Time will tell. Somehow, I just can't see the "New 52" version of Green Arrow tooling around in a big, yellow convertible.

I was so focused on the saga of the returning-only-to-be-destroyed Arrow Cars that I completely let a recent version slip my mind. I would be sadly remiss if I were to overlook the faux-Silver Age (pewter age?) Arrow Car from Batman: the Brave and the Bold! 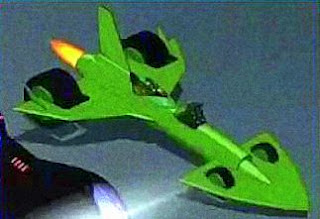 Now THAT's an Arrow Car! As seen on the cartoon, this snazzy looking Arrow Car (which is logically GREEN) is analogous to the series' Batmobile; capable of transforming into an Arrowplane and, in at least one episode, a spacecraft. In fact, it looks a lot like the formula one concept car BubbaShelby sent me a link to this morning. 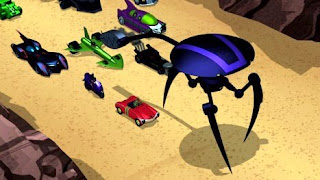 I have to say, Mattel who manufacture both Hot Wheels and Matchbox really dropped the ball on this one. With source material like this to go on, all they gave us was this: 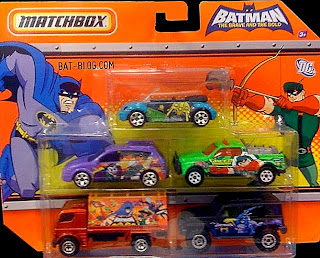 image heartlessly plundered from the Bat-Blog.

While I am pleased as punch to see G.A. get not only a vehicle but his picture right there on the package, I have to say a green, mid-sized pickup with his picture on the side doesn't really do anything for me. True, it sort of hearkens back to the Green Lantern/Green Arrow road trip of 1970. And yeah, I suppose it's cooler than the period of time when Ollie tooled around in the Sherwood Florist delivery van (The less said about that the better), but dang it! I want a matchbox of the Arrow Car.
Posted by Aaron at 11:35 AM