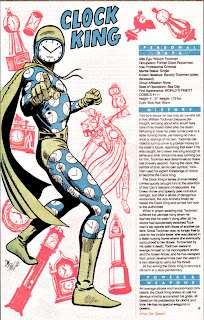 If there's one area where Green Arrow has been deficient over the years, it's in the Villains department. In his Golden and Silver Age appearances, G.A. seldom faces anyone who fits the description of a Supervillain, and even his more interesting costumed foes don't make comebacks...with one notable exception.

The Clock King fist appears in World's Finest #111 in the Green Arrow story "Crimes of the Clock King" Written by France Herron and drawn by Lee Elias. His name and origin are not given. He commits several clock-themed crimes and is then apprehended and sent to prison on page 6. 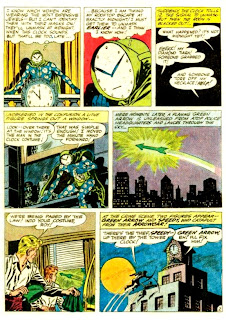 And it would have ended right there. But it didn't. 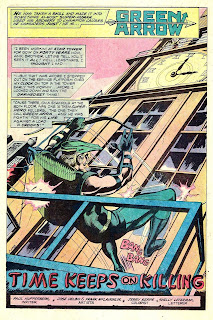 This time it is revealed that the Clock King is a man named William Tockman. Tockman has devoted his adult life to caring for his invalid sister. He made a promise to his now-dead parents that his sister would never have to go to a nursing home. When Tockman was told by a doctor that he only had six months to live, he created the persona of the Clock King and went on a crime spree to raise enough money to support his sister. He assumed if he were caught, he'd be dead in six months anyway. 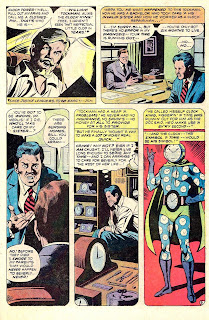 Unfortunately for the Clock King, the doctor had made a mistake. Now released from prison, years later, the Clock King swears revenge on his doctor and on Green Arrow.


The Clock King would later go on to join the Injustice League and the Suicide Squad. 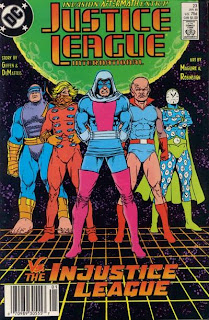 The Clock King is often mistakenly labeled as a Batman villain. This is due primarily to the Clock King played by Walter Slezak on the 1960's Batman TV show: 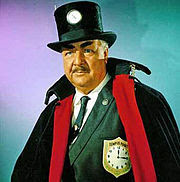 Who, in turn, inspired the Clock King episode of Batman: The Animated Series. That clock king, however, was a different man named Temple Fugate (A pun on the Latin tempus fugate- time is fleeting). 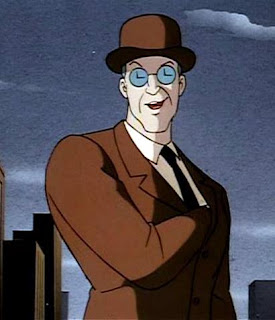 Recently, there has been a Clock King character on Batman: The Brave and The Bold. It is unclear however, if he is the Green Arrow villain or one of the two Batman villains as he shares traits of both. 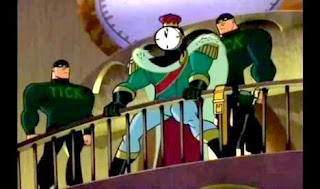