Stuff to Spend Your Green On 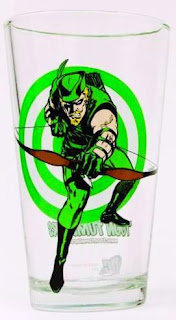 This nifty looking drinking glass was spotted by "rob!" Kelly of The Aquaman Shrine who had this to say:

"here's a pic of the (relatively) new GA drinking glass by Toon Tumblers. You can rail about social injustice while getting your drunk on!"

I also received this from BubbaShelby: 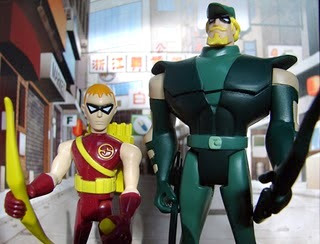 "I first picked up Speedy, Green Arrow's teen sidekick, a couple years ago. He was part of the Teen Titans series of figures from the recent cartoon (apparently he made an appearance or two.)

I picked him up with the intent of displaying him with Green Arrow from the Justice League figure series, but only recently, FINALLY, picked up Green Arrow. I found him on sale at Longs for 50% off (as previously noted) - so it all worked out nicely!"

For sending in these nifty pics of Green Arrow merch (and thus saving me the trouble of coming up with something to post) rob! and BubbaShelby have just become the first inductees into S.H.A.F.T. the Super Hero Archer Fan Team. Gentlemen, I will e-mail your certificates once I have the design completed.