No, that isn't the interview, it's a panel from World's Finest #268 Pencilled by Trevor Von Eeden and inked by Brett Breeding

Trevor Von Eeden did the pencils on the lion's share of Green Arrow and Black Canary back-up features during the 1970's. He also pencilled the landmark Green Arrow mini-series from 1983 (the first time the character had his own title!) as well as two runs at Black Canary in the 1990's and early 2000's. He was kind enough to consent to an interview:


The Arrow Cave: I know you got your start at DC co-creating Black Lightning (another favorite of mine, BTW), what led to you doing the art for the Green Arrow and Black Canary back-up features for World's Finest? 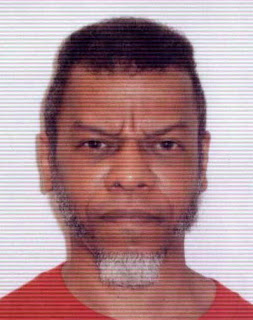 Trevor Von Eeden: All of the jobs I'd done for DC Comics during my entire 25 year tenure there were assigned to me. I was never once asked who or what I'd wanted to draw. The closest exception being THRILLER--where I'd introduced Bob Fleming to Dick Giordano, after Bob (who was working in the mailroom at the time) had bumped into me in the hallway, and asked to run his idea for a series by me. We went into an empty office, and after listening to what he had to say, I immediately took him to Dick Giordano's office, with a recommendation that Dick should listen to what he had to say. Then I left--and Bob took it from there. The rest is comics history. Robert Loren Fleming was a creative GENIUS--horribly undervalued, and underused by DC Comics.

TAC: I get the impression that you were not all that pleased with the final results when your art was being inked by Vincent Colletta. What was it about the results that dissatisfied you? 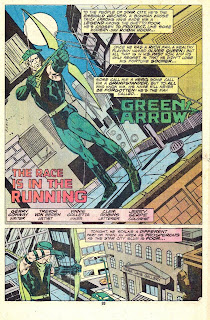 TVE: To say that I was "dissatisfied" with Vinnie Colletta's inks over my pencils, is to redefine the word "understatement." I absolutely hated what he did to my work--ever since my debut on Black Lightning. His heavy-handed style was in complete contrast to my fine-lined and fairly delicate pencilled drawings, and were it not for the fact that I totally enjoyed drawing comics, I'd have become--and remained--horribly depressed, after seeing the published version of his inks on my work (In the early years of my career, I seldom saw the inks before the issues were published.) Fortunately, at that point, I was always busy learning and developing my Art, as I worked on the various jobs I was given--so I managed to forget what Colletta had done, and lose myself in whatever I was working on.
The only artist whose work I liked after Colletta's inks, was the great and inimitable Jack Kirby--but then again, Jack's work was impossible to ink badly. Nevertheless, I did like the light feathering that Colletta added to Jack's bold, slashing, confident lines--it provided an interesting contrast, and an oddly likeable "softening" to the larger-than-life power and beauty of his visuals. But even then, Colletta's notorious habit of omitting and/or obfuscating elements of the Art (usually backgrounds)was still at work... Fortunately for me--and all of Comicdom--it is literally impossible to ink Jack Kirby's work badly. It was simply THAT good...or, rather... that GREAT!!

TVE: Am I a fan of GA? Not until Neal got ahold of him, and gave him a hip, new costume, a likeable, free-wheeling personality--and turned him into a person of high moral integrity--all in the famous GL/GA series with Denny O'Neil. Not coincidentally, those are traits possessed in abundance by Neal himself (except for the hip threads--in the over a decade that I'd worked for him at Continuity, Neal always came to work wearing a dress shirt and tie--and usually, loafers. When he rolled those sleeves up, the magic began! But the tie always stayed on...I'd worked for Neal concurrent with my DC tenure--starting in 1978, until somewhere in the late '90s.)
I think I've also just answered the "which version of the character do you prefer" question...

TAC: When you were approached to do the art for the 1983 Green Arrow mini-series with Mike W. Barr and Dick Giordano, was there any talk of it being an ongoing series? 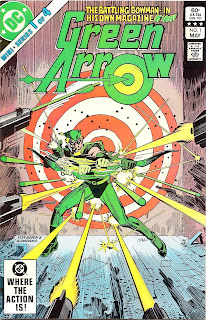 TVE: When I was first told about the GA mini in '83, there was absolutely no mention of it becoming a series. I'd done a series of short, 8pg. GA stories in World's Finest prior to that--but there seemed to be no desire on DC's part to put me on any type of regular series--I was usually given one-shot jobs. I don't think they really wanted me to become any kind of "fan favorite", much less make any real money in this business. My essentially mascot-like novelty role as DC's 'first black artist" seemed destined to be my fate. Bear in mind though--I never experienced any kind of outright racism or hostility at DC Comics--but the fact remained that black people in America in general, back in the '70s/'80s were pretty much relegated to (and expected to accept) minor and/or subservient roles in the overall scheme of things. "The Great White Father" knew all, and dealt with the important things in life, y'know? We "children" were just supposed to smile a lot, and at least appear to be happy.

TAC: How was working on a Mike W. Barr project different from working with Bob Haney?
TVE: Working with Mike W. Barr was a great pleasure for me. I liked both his writing, and he as a person, the few times that we'd met. I'd never met Bob Haney--and the scripts of his that I'd drawn (such as I remember them) were essentially generic super-hero fare. I brought my own inspiration with me, for those WF 8 pgrs. That's another thing--the GA mini, like the Batman Annual #8, was an extended story, which allowed me to develop my storytelling and drawing abilities in a real way--like a real artist and professional--rather than just knocking off light, "fluffy" pieces one after the other. I did draw a few two-part GA short stories--but again, they were mostly generic fare. I took the opportunity to develop my own skills (drawing, layout/page design/storytelling), using those jobs as essentially...fodder. I did enjoy a few of the "horror/mystery" short stories though (House of Mystery #305--"Art Attack", written by Joey Cavalieri--one of my all-time favorite jobs, due to an interesting script, which enabled me to "channel" the work of some of my favorite artists, M.C. Escher and Rene Magritte--as well as / HOM #316, "String Out" written by Bob Fleming, and nicely colored by Nansi Hoolihan.)

TAC: Back to the 1983 mini-series- looking back at the ongoing series that was eventually launched in 1988, do you think that the '83 version of the Green Arrow was drowned out by the "grim and gritty" trend that swept comics in the mid 80's? I mean, your Green Arrow is kind of a fun-loving swashbuckler at heart, but the later Green Arrow shoots people a lot and has a mid-life crisis.

TVE: I can't comment on the difference in GA between how he appeared in my mini-series, and his later incarnations--because I've never read anything else in which he'd been featured, since. The idea of him shooting (and killing?) people is incredibly repellent to me. That's a corruption of an ideal (much like when I'd heard that my "firstborn", Black Lightning--had actually murdered someone, in later incarnations of the character! Asking an editor about that, I was told "yes, he did--but it was done off-panel." As if that made a difference!) Geez--even in fiction, black people can't seem to get away from the negative programming that has been the bane of their existence, since the birth of this nation... Maybe now that America has a brown president, the day will come when it actually elects a black one... (Contrary to the apparent and insultingly obvious advertising stratagems so prevalent in the 21st Century--I don't consider "brown" to be the "new black." In America, "black" has always meant "inferior"--it's never been a descriptive term, only a political one--and that's a game I NEVER play.) The jails, slums, and drug dens in America are full of black people--but that's seldom because they really deserve to be there. But I digress, and that's a story for a different occasion...

TAC: Were you more pleased with the way your art turned out when it was inked by Dick Giordano?

TVE : I LOVED Dick Giordano's inks on my GA mini-series!--Absolutely!! 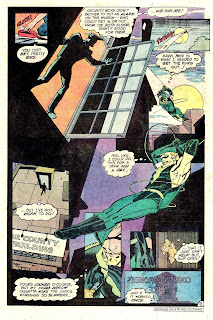 TAC: Do you have a favorite Green Arrow or Black Canary story that you worked on?


TVE: That Mini would also count as my favorite GA story--not just because of Barr and Giordano's excellent work, but also because it featured Count Vertigo, a character introduced in one of the WF 8pgrs I'd drawn--and one whose costume I'd designed! 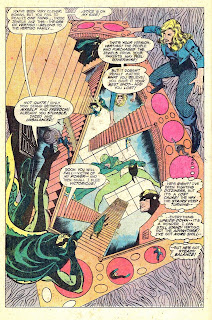 My favorite Black Canary story would probably be a toss up between the third issue in the mini-series I'd done in the '90s, or issue# 7 in the regular series, featuring a character (whose outfit I again designed) called the dancer. I liked the Art in #3 of the mini--and both the Art and story, in #7 of the series. Actually, I just remembered-- I also liked both the Art and story in issue #5 of the series--the character of the villainess Blynde, was very cool. (Yep, I also designed her costume, as well...) Issue #6 had its moments, but 5 and 7 were the ones that did it for me.

TAC: If you were approached to do another Green Arrow-related project, would you be interested?

TVE: Yes, I'd LOVE to draw Ollie (Green Arrow) Queen again! Provided that it's an interesting (to me) script--and that I can ink it myself. I love the big lug's personality--and that Adams designed costume, as well. My absolute favorite blonde super-hero, since Kirby and Buscema's Thor!
Btw, the attached illo is a color pencil piece I'd given to Yumy Odom, founder of The East Coast Black Age of Comics Convention--in return of his invitation to attend, where I was treated like a king--and never forgot it! 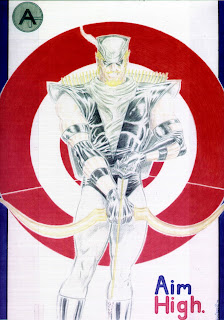 Yes, I gave him a picture of a white, blonde super-hero (does Ollie have blue eyes? I forget)--and why not? I'm no racist.


TAC: Thanks so much for taking the time to do this interview.

TVE: Thanks for the questions. Feel free to ask any more, if you have 'em. This was quite my pleasure!

To see more of Trevor's work or to obtain information on commissions, please visit his site.
Posted by Aaron at 11:14 PM